Just been to this talk by Gojko on Product Management using Effect Mapping. It is a technique which is useful for high level project visualisation. It is very similar to mind mapping technique where stakeholders, users and teams colloborate on project scope.

It helps reduce scope of wish lists and helps teams focus on business goals by asking the questions Why?, Who?, How? and What? in this orders

Why? Allows you to narrow down to the business goal. This is the centre piece of your effect map from where all other discussions should start and reason upon

Who? It is not the user but it is who can cause the desired effect to achieve the business goal. In most cases these are project/ product stakeholders.

How? For each stakeholder , identify how the target group can achieve or obstruct the desired effect in real life and not in terms of software, these should effectively be stakeholder needs

What? For each stakeholder identify what business activities or software capabilities would support the needs of the stakeholder. These become your epics in the product backlog

At the end of the effect map both the stakeholders and team should be able to see the synergy of the business goals and what needs to be achieved.

For more see, Gojko’s white paper on this see http://gojko.net/effect-map

Some advice from people who have used this are..

A useful tool I have found which you can use for this is at www.mindmeister.com. Check it out its pretty handy. Even if you are a developer striving to do something on your own , if you put your ideas on a mind map it will help you visualize the idea.

One of the web services we have has a bunch of SOAP UI Tests. I wanted to make sure when this was run on the build server we have good feedback for each test case rather than a whole build running a pack of tests and telling you if it failed or passed. Kind of a reason i was moving this build away to Teamcity from cruise control

The MSBuild script is as below. I had to define the variables I need and the Directory where all project files for Soap UI can be found.

The next thing I had to do was run each project file using the SOAP Ui testrunner.bat file.

The options I have used –j will ensure JUnit style reports are pushed out of the Soap UI test runner, for local builds you could just make it push out Html reports

-h allows you to specify the host header to use for your Urls, The host header you supply here will override what is stored in the SOAP UI projects , so you run these tests on different sites based on your environment.

I have done a FileUpdate because i wanted to change Urls of the service from the old server to the ones on the new servers, you wont need this and it can be ignored

At this point I hooked up the MSBuild target to run on Teamcity using the MSBuild runner, for the target “RunFunctionalSoapUITests”. The feedback wasn't good

The final bit you need to do is configure Teamcity to read the xml styled junit reports that the test runner is spitting out. You can do this using the Build feature option for XmlReport processing as shown in the screen shot.

Now trigger the build if you have sorted out all the other variables required you can run the build and see the output on Teamcity, pretty good really on test case by test case basis. 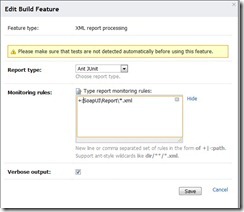 User Story - A Promise to have a conversation


Time and again it is important to constantly remind your team that a User story is not just a way of defining a requirement but is actually the premise on which you promise to have conversations with the user. It is by no means a finalised description of what the system should be doing. The first time it is written the analyst or product owner only has as much information as the user gives them. This information is pretty much raw most often a wish list off some post-it notes on the edge of the users monitor. It will have information of what the user wants to achieve or the grand plan of how something could be done brilliantly to save money or achieve a business goal. It will not tell you what the user wants the system to do.
This is where collaboration is fundamental to the idea of agile development ( should i say ADD – Agile Driven Development). The user story is to be evolved by having conversations between various functional experts. By functional experts I mean a QA, a developer, a business analyst or even a UI designer for that matter. The question is why? I guess it’s because these functional experts can think of the software that is to be built with a view of what the system should do, A user story should convey both what the user wants to do and what the system will do to be complete, clearly the initial draft of these stories didn’t do this.

When a developer evolves a story on his own he is going to make sure it is technically brilliant (may be not always) and eventually forget what the user wants , in most cases this conversation ends up in the developer trying to define what the system should do and what the user wants..  how many over engineered systems have we not seen and been part of in the past

When a UI designer is going to evolve it on his own he is going to make sure it is pretty software and most likely to make it usable but with lack of clarity of the functionality that the user really needs, he just has his wireframes or prototypes, which shows the user the dream he wants to have

The analyst on the other hand is so caught up with making sure he conveys what the user wants he forgets most often how to test the functionality or in some case forgets to tell the team what the system should do  , well don’t blame him they are not the functional experts on the technical implementation of a system

We have seen these things happening all the time, any form of methodology without collaboration kind of summarises the situation in which these things happen. Alright then, so we can’t do without collaboration so what now and how far do we go with collaboration? How do we know where to stop, well I am going to have to be vague and say well it’s for the team to figure it out in the context of the system they are working but then, I guess some of the answer lies in the ability of the team and the user to work towards coming up with stories which adhere to INSPECT and the story itself becoming the documentation of the system.

As Gojko says in his book “Specification by Example” stories evolve into living documentation of the system. When you can actually read a story and express in simple English, the aspect of what the user wants to do and what the system is doing to achieve the users need, you could say you have reached that point where you can stop and move on to the next bit of functionality.

Again living documentation is not written once; it evolves over a period of time by refactoring constantly; Teams that collaborate constantly recognise this need to bring the stories used to build the system in line with the domain concepts in the system, and vice versa, it is a constant cycle of refactor and improve.. Oh should I say iterate and continuously improve... Rings a bell... Agile?. In reality, collaboration is under-rated by teams and it is something teams think they should do because it needs to be done. Most agile teams do this once for every story (I am laughing already) while estimating the story not so much while actually implementing it. That said there are also teams which constantly collaborate. I guess question is which team are you working in and what are you going to do about it ?